May 31st, 2019
​⏰ 2 minute read
No US recession
Bond yields are falling again. Cue hysteria over negative yield curve in the US (long rates lower than shorter) & panic about the world economy. Yes there’s a perfect correlation between bonds & nominal GDP growth, so a slowdown, but no US recession. The yield curve is positive & widening. It’s the rest of the world we should worry about.

10 year Yields
US
US 10 year yields have fallen back below 2.5% from 3% before, but they’re still higher than the short 2 year yields, so no recession. At 2% the 2 year has been below the Fed rate all year now. The one thing which is clear is the Fed made a mistake & should cut rates. D Trump is proven correct again.

U.K.
The U.K. is in second place but far behind. 10 year yields in the U.K. have fallen back below 1%. But recent amazing political events there are finally giving us hope that a break out of no growth Europe is coming very soon. This means exciting faster growth ahead & tremendous potential for UK equity investors.

Germany
The other major economies, Germany & Japan both have negative 10 year interest rates. The very definition of pathetic. The difference is relative. Japan is not at new lows, above the previous lows of late 2015/early 2016. German rates are back at those levels, meaning the EU is not surprisingly now the weakest of the major economies.

Europe
After Japan, Europe was the next region to stop growing. After enjoying a spurt in the late 2000s, but not growing the previous decade, the Germany economy has shrunk again in the last 10 years in $s. No European economy has grown at all since 2008 & several since 2007. The gap with the US is getting wider & wider.

Asia
The tigers of Asia ex japan are the latest to slow. The economic drift started 2011/12 & contihues to now. China’s 1Q 2019 nominal GDP growth was slightly faster than Indonesia 7.8% vs 7.7% but with currency weakness both are less than 1% in USD. The US meanwhile is growing 5.4%. Indonesia $ imports, our favorite strength measure, are lower now than in 2012.

The customer
US
GDP does not even tell the whole story. The real strength of the US economy is the ability to sell things to itself. There’s a quaint idea the US somehow relies on the rest of the world, it doesn’t. It sells to itself first & then buys from others. Private Consumption in US is 68% of GDP so $14.2 trillion!

Europe
Over in Europe UK consumption is also 68% of GDP, the 2md strongest in the world. The only problem is the no growth of GDP, but we can fix this outside the EU. In Germany consumption is only 52%. So while US GDP is 5X Germany, US consumption is over 7X! Try shopping in Germany on a Sunday afternoon. It’s shut.

Asia
I’m sure you can shop in China on a Sunday, but private consumption there is only 39% of GDP. The gap with US GDP in total is almost doubled in consumption! Indonesia used to have one of the highest consumption rates in the world at over 70% in the 1990s, now its 56-57%. That means only $600 billion 1/25th of the US! 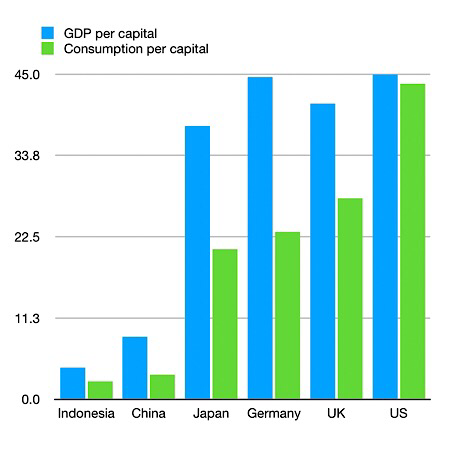 Valuation
The answer is simple. We in Indonesia need much more consumption. That’s the way to drive our economic growth. It’s the secret to everything from education to health to the environment. Sell more things to more people to create more growth & wealth. There is a silver lining. The JCI is worth only 75% of consumption. The US is 2X. Our stockmarket should triple.

To find out what stocks to buy... sign up for Sharpfokus Saham 📈💰👍