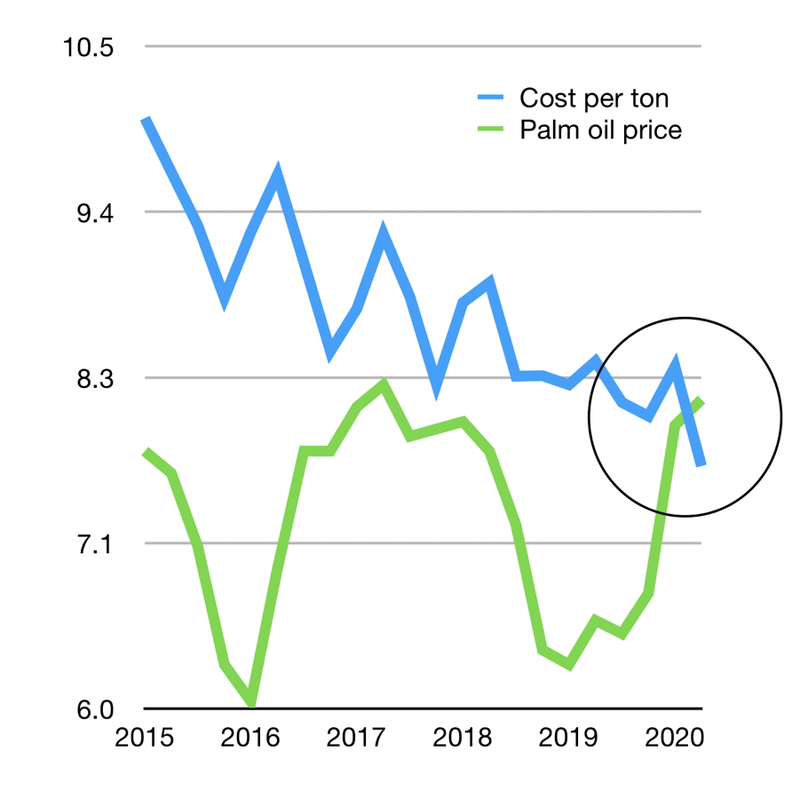 Facebook
The market winners the last 4 years have been technology & some social media stocks. But while some things last for ever, others disappear surprisingly quickly. We are at one of those points where the gap between the value of things people need & want has become too wide. The arbitrage is to sell Facebook & buy palm oil,

Environment
Orangutans
Why pick on Facebook & palm oil? Because while FB is seen as clean & modern, palm oil is not. This is 100% untrue. One of the biggest negative images of palm oil is orangutans going extinct. Look at the data & the opposite is true. Wild population estimates have quadrupled in the last 20 years. The same is true of polar bears.

Land
A second popular media image of palm oil is of large tracts of pristine forest disappearing every minute to plantations. This is 100% untrue. Palm oil covers only 5% of Indonesia. New planting has fallen from a peak over 10 years ago & not only has growth fallen a lot, it’s now negative.

Biodiesel
Loss
Also wrong is the biodiesel perception of palm oil. You’ve probably heard that biodiesel is a great new way to use up an oversupply.... the first thing is it’s not new. Japan used biofuel in WW2 when they ran out of fuel. After the war they stopped because edible oil is always more expensive than fuel oil. On avenge palm oil is 50% more expensive for the last 20 years.

Costs
Because biofuel makes a loss, someone has to pay. You might not be surprised the people who pay are the palm oil & refinery companies... palm oil companies pay tax to buy their own oil, refineries pay fines if they don’t deliver & the whole industry pays much higher transport costs as biofuel competes for the same barge capacity.

Crowd
While creating a false demand not surprisingly raises the cost of supply, it also crowds out real demand. The popular perception is that without biodiesel to soak up over supply the price of palm oil would crash. But we don’t know that this is what would happen. It’s equally possible profitable long term demand would have replaced it.

Supply
Supply
But this issue of what might have happened is about to become a moot point as a more powerful cyclical play moves in. The supply of palm oil is slowing down & the image of large oversupply is also 100% wrong. From our Sharpfokus Saham stock coverage, average production growth the last 3 years of 4% will slow to just 1% this year.

Demand
At the same time as supply is slowing down, the exact opposite is happening to demand. The latest forecast for 2019 is an incredible 10% growth! The reason for this is also interesting. Palm oil is approaching 40% of all edible oil & is now 40% larger than the 2nd biggest. There is nothing else.

Shortage
With supply slowing, demand rising & no alternative, both the palm oil & total edible oil markets are shifting into a structural deficit for the first time probably since the early 1980s. At that time the price was $1000, now its just $500. Adjusted for inflation a new target price would be...very high.

​Sebastian
Sharpfokus Saham is 💯 stocks in your pocket. Online research, data, financial models & calculators to help discover the hidden future gems. All for less than a small bottle of water per day, Rp500k for 6 months access. Sign up below.
Sign up for Sharpfokus Saham